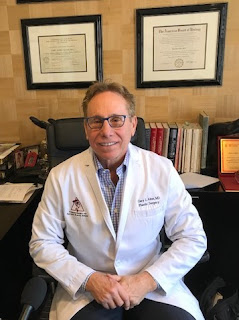 When this writer says it was a fascinating conversation, I mean it. Whether you agree with the issues of those who feel they were born in the wrong body or not, it's worth an hour of your time to listen to what he has to say.

He didn't start out to be in this field but at some point he wanted to make a bigger impact on medicine and people's lives and eventually redid his practice and changes began to happen. In the podcast, Interesting People with Bob Brill, we discuss everything from child hood surgery, to every type of sexual surgery imaginable. And there are many.

And we didn't leave out the questions which arise due to religion. His answers may surprise you. With the military being the latest to have to deal with transgender people, and the field growing very quickly, it's an issue which is going away.

Will insurance pay for it, why go to another country to have it done and why are so many of these surgeries done in Thailand? It is a fascinating subject and a fascinating man behind the scenes, who is as conscientious about what he does, as he is skilled.

Join us for the podcast with Dr. Gary Alter. You can find out more about his at www.altermd.com.

Dr. Gary Alter is one of the nation's leaders in transgender surgery, having performed numerous surgeries for sex change, or sex reassignments from his Beverly Hills office. A major advocate of at least a year of counseling before patients can have the life changing surgery, he discusses everything from the actual step by step surgery, to the religious issues involved around the world. A fascinating interview just talking about what has become one of the most controversial yet growing medical fields today...and the future of the field as well as the military and of course; insurance issues. Join award winning journalist Bob Brill as he walks the good doctor through the issues for an entertaining hour.

March 31, 2018
Chris Montgomery Bender is the head of Prodigy Talent, a Hollywood Talent Agency and a former White House lawyer. Check out this episode! Chris Montgomery Bender likes to joke he’s on the third mortgage of his soul. He’s been: 1. White House lawyer 2. Political operative 3. Hollywood talent agent Those three professions are enough to put anybody down at the bottom of the list of most beloved people. Chris is different though.  In our podcast; “Interesting People with Bob Brill” he talks about his humble beginnings and how he wanted to do something with his life to make an impact. As a teen-ager he began working for a local politician in Colorado. A savvy learner, he took that all the way up the food chain in the state and then to the national stage with a stop in law school in between. Working in the George W. Bush White House was an experience he cherished and as he tells us “you never forget what it’s like to stand in the Oval Office no matter what your
Post a Comment
Read more

March 11, 2019
Rene's Van and Storage in Los Angeles has been around for 85 years and moved presidents, mega stars and rock stars. The tales abound but not only that, average folks too. Maybe you. Some of the most interesting tales of the strangest and multi-million dollar items moved over the last eight decades. Tune in. Check out this episode! Marshall and Michelle Lambert spend a lot of time looking up as you can see in the photos. Rene's (Marshall's grandfather) held this company business 85 years ago and it has become the "go to" mover and storage place for Hollywood's elite and political figures like LA Mayor Eric Garcetti, too. Ronald Reagan, Frank Sinatra, Clark Gable and even Marylin Monroe all used their services over the years. Million dollar paintings have been stored here, $100,000 pieces of furniture and more. The tales they have to tell are fascinating and you can hear it all at the podcast above on "Interesting People with Bob Brill." H
Post a Comment
Read more

January 19, 2019
(Steven Geiger, Founder Mensch International Foundation) "Interesting People with Bob Brill" a podcast with Steven Geiger, founder of the Mensch International Foundation.  So what is a Mensch? It's the first question I put to Steven Geiger, the founder of the Mensch International Foundation. His answer simply, "its a German word meaning 'Human Being.'" In one of the most entertaining hour long podcasts we've done, Steven talks about being a Mensch and who is and who isn't in today's society, as well as how to become one. And being a better human being is what the foundation is all about, and teaching younger people how to be a Mensch. It's also about the Holocaust. Steven is the child of Holocaust survivors, survivors of the death camps. Born in Hungary, he grew up in the United States and like so many in the community, feels people are forgetting about what happened, and like most in the communi
Post a Comment
Read more